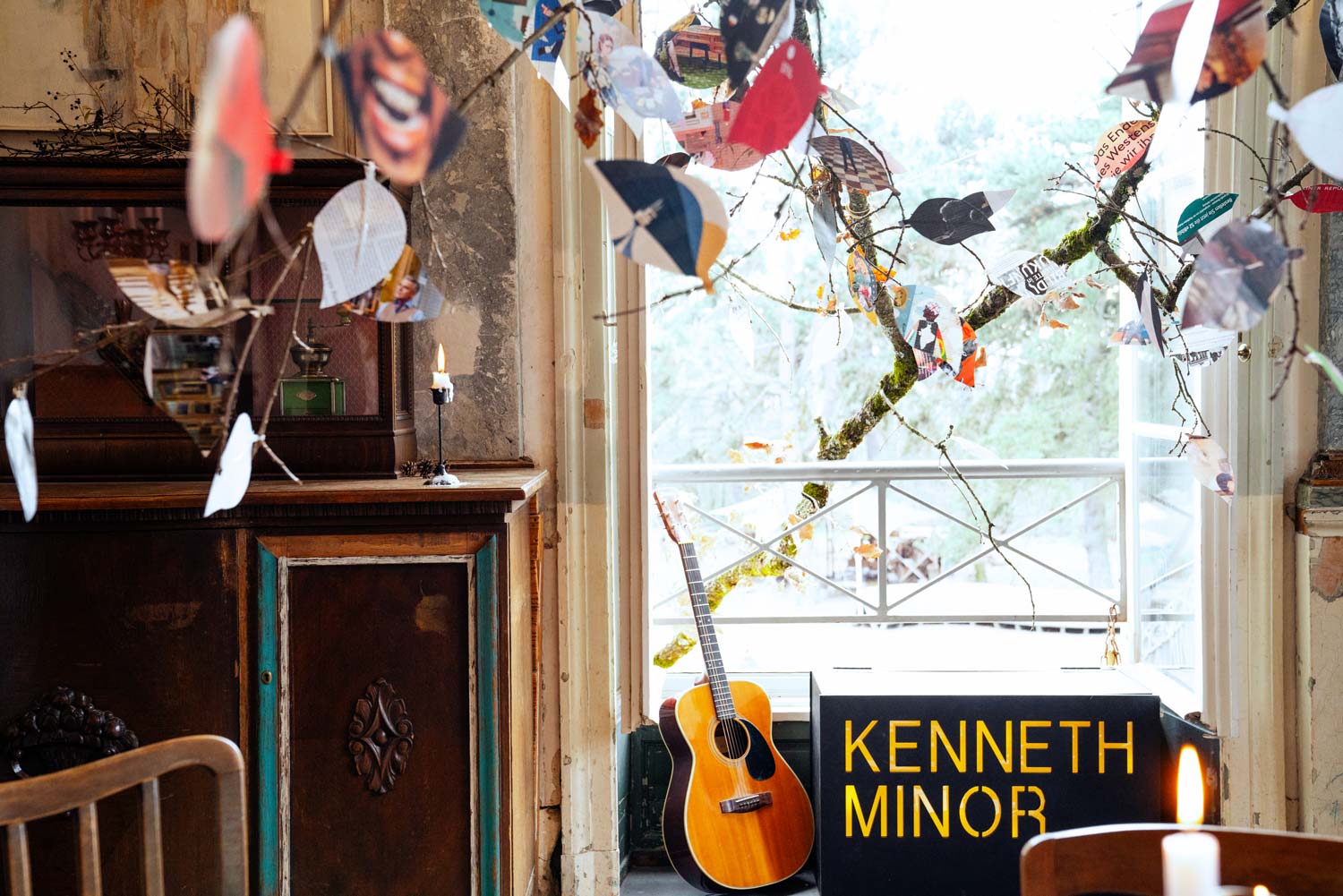 Kenneth Minor is a band. A universe with different constellations, circling around a fixed point. Bird Christiani. The constant. The haven of calm. Founding father and mastermind since 2007. Guitarist and singer. Songwriter in a time where the use of the term ”singer-songwriter” has almost become a swear word in this country. Even if singer-songwriter only means singing self-written songs, some people might associate it with the cliché of the shoe-gazer with a delicate voice to match. A little bit of strumming, pretentious demeanor, the familiar sound and the milquetoast lyrics, a little bit of “pling-pling” and a pinch of hipster style. Finished.

But we are speaking of Kenneth Minor. Here is where manual skills studiously appropriated from the US folk bluesmen of the 1920s, meets with postmodern ideas, creative gadgets and unorthodox arrangements. This is where happiness exists despite real suffering. This is where you speak against and get heated, where you use the language of love, lose your patience, and still never hate. You tell stories and paint with words. This is where the music speaks.

The intrinsic influences ascribed to the music of Bird Christiani are quite varied. Names like Ryley Walker, Mark Kozelek, Elliott Smith, Paul Simon, Bob Dylan, Ray Davies, Beck and Mark Oliver Everett are mentioned again and again. If you ask Christiani, you will find out that he became aware of some of those artists after reading his own interviews and reviews. The list of names remains incomplete and private. Somehow it is nice these attempts to classify Kenneth Minor are also relavatory for KM.  Perhaps there is a common geneticism to authentic music, and this is what brings cultured musical voices to see roots where they themselves first discovered this magic.

Kenneth Minor was founded by Jörg “Bird“ Christiani (guitar, vocals, lyrics) in 2007. Accompanied by Steve Gaeta from Los Angeles (Kool Ade Acid Test, Universal Congress of) on bass and percussion, Kenneth Minor played the first show opening up for Bobby Bare Jr. (Nashville/Tennessee) at the legendary Hazelwood Studios in Frankfurt a.M. In cooperation with the German microphone manufacturer Beyerdynamic, a four-track-promo-CD (50.000 copies), entitled “Folk Session“, was released by the record label Hazelwood Vinyl Plastics. Shortly thereafter, the song “Call You Mine“ was positioned as the opening track on the record label’s 15th anniversary compilation CD called “Showroom Rebels“ (King Khan & His Shrines, Mardi Gras BB, Kool Ade Acid Test, Bobby Bare Jr. etc.) In 2009 Kenneth Minor was joined by Thomas Berg on electric guitar and lapsteel. As a trio, Kenneth Minor recorded their first album “In that they can’t help it“, which was produced by Wolfgang Gottlieb and Gordon Friedrich and finally was released by Hazelwood Vinyl Plastics (good press: e.g. Rolling Stone, Intro). In 2010 and 2011 the band extensively toured throughout Germany and occasionally through Austria, Switzerland, Belgium, and the Netherlands. As a trio, Kenneth Minor toured with Hüsker Dü founder Grant Hart (+ 13.09.2017) and solo with Pétur Ben from Iceland. Particularly noteworthy are two solo gigs at the legendary 12 Bar Club in London (UK), where Joanna Newsom, the Libertines, Keane, Jeff Buckley etc. had performed before. Altogether there were around 130 gigs within just 2 years. Songs from the first album got airplay (gold status on Motor FM with the song “Call you Mine“, single plays on br 1, detektor FM, DeutschlandfunkKultur). In 2012, Okta Logue drummer Robert Herz joined the band and they recorded the second album which again was produced by Wolfgang Gottlieb shortly after Steve Gaeta had left the band due to personal reasons.

The years 2012 to 2017 were marked by unfortunate circumstances. Like many indie labels, Hazelwood was struggling for economic existence after 27 years. Nevertheless, the band felt a friendly bond and remained loyal to the end, which simultaneously produced a standstill of its own. The longplayer was recorded at Hazelwood Studios, but was not able to be released for a long time. The struggle for existence ultimately ended in concurrence with the label's bankruptcy.

April 26, 2013 marked the last performance with Robert Herz which took place at Pixelkitchen in Frankfurt am Main. In 2013 and 2014 “Bird“ Christiani performed as a duo with Athena Isabella after she joined Kenneth Minor. During this time, Thomas Berg devoted himself to his private and family life. In 2015, the second album was finally pressed on vinyl. A solemn concert took place at Schlachthof Wiesbaden on July 15, 2015.

Due to injury, Robert Herz who had devoted himself increasingly to the intensive touring activities  of his band Okta Logue was replaced by mutual friend and drummer Florian Helleken (The Audience), a band member ever since. The release show was opened by Fooks Nihil with many other friends; Robert Herz (percussion), Wolfgang Gottlieb (bass), Thomas Berg (lapsteel/electric guitar), Luca Hanisch (guitar/vocals), Benno Herz (guitar/vocals), Bees Village (vocals) und Thies Möller (trumpet) sharing the stage with Kenneth Minor and celebrating this long anticipated release.

In 2016, the preparations for the third album had already been started. In 2017, the digital release of the second album called Phantom Pain Reliever was realized through the newly born label Lotte Lindenberg. Almost simultaneously, the band’s long-term friend Andreas Lüttke joined the on bass. (Again to positive feedback; record of the week on gaesteliste.de, Flight 13 etc.). The streak of bad luck had come to an end and a new creative energy was set free. There were rumours of a "comeback". In the beginning of 2018, the recordings of the forthcoming album were completed. The recordings were done by Lolo Blümler at Iron Bar Studios in Darmstadt. Hannes Plattmeier mixed the tracks in London and Hamburg. The mastering was done by Hans Wagner in Vienna.

Kenneth Minor found a new home with the Düsseldorf label Unique Records (Suzan Köcher, Love Mache etc.) since Lotte Lindeberg was more of an interim solution. In addition, there was future cooperation with the 4MA from Dortmund, taking on the responsibility of promotion and management tasks. On January 31, 2018, Kenneth Minor received the “Innocent Award“ from the Berlin Magazine Cute & Dangerous in the category “Best Singer-Songwriter 2017“.

In October 2019 Kenneth Minor released their third album "On My Own" on Unique Records. After two highly-acclaimed longplayers "In That They Can’t Help It" and "Phantom Pain Reliever", performances at home and abroad (from Wiesbaden to London), a rollercoaster ride, and the Innocent Award 2017 in the category "Best Singer Songwriter“ in his pocket, Kenneth Minor introduces probably his most multi-facetted third album without losing the common thread: stomping folk blues, stellar fingerpicking, swamp, warm, fuzzy and soulful electric guitar, complete with authentic punk attitude, minimalist style, relaxed folk presentation, idiosyncratic beat in a contemporary mould - without appearing clichéd. The melodious character of his voice supported by harmonious choir singing, oscillates between fragile expressions and self-assured swagger. The totality paints poetic-linguistic images of the inner and outer world, spanning a contextual arc between autobiographical experience and social criticism.

In support of this release there was a club tour as a trio in autumn / winter 2019 and, in addition to positive reviews from the press, the record received wide exposure: (SWR1, HR 1, WDR5, Deutschlandfunk, Antenne Thuringia, Bayern2 / Zündfunk, Byte FM, MDR 1 Thuringia, various college radio stations).

In January 2020, when the effects of the worldwide virus spread were not yet known in Germany, a New Year's Eve party inaugurated a two-week living room recording session.

Bird Christiani's songs met the New York musician/producer Gregg Weiss. After a few joint concerts over a smany years a friendship had developed due to their common musical interests. A fruitful musical cooperation was the natural outcome.

The basis of the project: a couple of guitars, an upright bass, a banjo, a drum, some recording equipment and two different perspectives meeting in the middle.

This became the collection "Living Room Sessions" named in honor of where it was created. Four songs that did not really fit into the context of the album "On My Own" (released in 2019) were produced, recorded and mixed by Gregg Weiss (NYC/FR) who also added his instrument skills. The tracks were mastered by Hans Wagner (Vienna) released on July 17th, 2020 on Unique Records. They quickly found their way into the radio broadcasting programs (Deutschlandfunk Kultur, WDR5, SWR1, various independent stations).

“Grim Reaper” makes you sway along and, despite the dark title, exudes a summerlike freshness and positive radiance with a flashing Knopfler-style picking solo and clawhammer banjo. "Simple Twist", sparsely orchestrated with upright bass, guitar and vocals takes a well-known motif and transforms it throughout the entire song, wrapped up in Renaissance harmonies. "A Song to Dream Away (Still Me)", which comes across as a Kurt Vile-esque sentimental tune, enchanted by drifting tremolo atmospheres and "Family Tree", pulls off a native Midwest, USA vibe; Tumbleweeds, Tom Joad leaning against the barn ... and speaks an enchanting homage to you Bird’s loved ones.

Currently, under virus-related restriction measures, Kenneth Minor concerts are taking place again (Centralstation Darmstadt, Batschkapp Frankfurt a. M. etc.) and the down time is used to prepare the next long player while tour life is largely at a standstill.